The Future of iOS App Development- Changes and Improvement 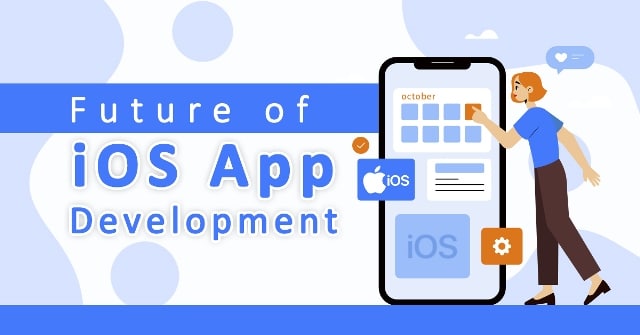 As the targeted audience’s needs are changing, there is an acute need for businesses to try and keep up with those shifts. Because if they don’t’ address these concerns, their business will perish quite soon. The realm of iOS app development is changing at a lightning-fast speed. Keeping various factors in mind, this is a clear indicator that innovations are being made in mobile OS platforms.

Therefore, here we shall have a look at the possible advancement in iOS app development. Moreover, we shall also check what all changes can take place in the technology in the near future.

How shall iOS app development change in the next decade?

The way the iOS mobile platform has evolved since 2007 has been commendable. In the last 15 years, the mobile OS has shown the world how innovation can be done and what impact it can have on specific users.

Therefore, in the coming decade, three main futuristic changes will bring in a paradigm shift in iOS app development; let us have a look:

Augmented Reality has a big chunk in iOS apps development in the future. Moreover, after the pandemic, we have seen a spectacular rise in business sectors employing AR in their marketing technique to give their customers a fully immersive user experience.

AR is an exciting technology; it helps enhance the user experience in different industry sectors such as ecommerce, gaming, etc. Thus, because of these stupendous advantages, businesses of all sizes look at custom iOS app development companies that will render great results with Augmented Reality.

Moreover, seeing the horizon of Augmented Reality expanding, Apple has rendered an AR development kit to the iOS app developers to make it easier to develop apps with the technology.

iOS has a long relationship with artificial intelligence as it was the first mobile OS platform to launch a voice assistant named Siri. AI technology was in its development phase but, over the years, has grown into leading technologies that are paving ways for new improvements in iOS app development.

Advancements in voice assistants are just the tip of the iceberg of what AI will bring for iOS app development. By amalgamating with machine learning (ML), AI will help develop more innovative applications that will be up with the changing trends and be capable of creating a revolution.

Moreover, to avail of all the benefits of the technology, businesses have hired leading iOS app developers. These developers have complete knowledge of working with AI and use the technology to their advantage.

The Internet of Things (IoT) is been introduced into the tech world just recently. Although, it will be safe enough to say that it has taken the entire tech community by storm in a very short span. Integrating IoT with iOS app development has a lot of potential in the future. Along with that, it is expected to be used to the highest level of usability.

IoT over the years will allow different products to communicate with others in a hassle freeway. Also, with Swift 3.0, the adoption rate of IoT in iOS mobile app development will increase and thus expand the landscape of innovation in iOS.

There is no doubt that cloud-based iOS apps will be significant in the future. For example, there arose an acute need for data storage after the global pandemic. The world was compelled to work from home or other remote locations. So, cloud applications can organize, store, and manage data in enormous amounts without hindering the ongoing user experience.

Along with this, cloud-based iOS applications would have fewer restraints in completing technical tasks. Also, with CloudKit, the business organization would have access to systems that are convenient. It becomes easier to manage all the data and app development procedures under a single roof.

Chatbots would be vital in enhancing user experience and engagement in iOS apps. The chatbots are available 24*7 and thus will offer immense benefits to the customers without making them wait to clear their queries.

Moreover, apart from solving the queries of the users, the chatbot feature in the iOS app will help them make more informed business decisions.

Humans are in love with stats and numbers. And wearables render us numbers about our health in a classy way and they appear cool as well. Because of these amazing innovations and the constant improvement in technology, the wearable technology market is estimated to touch $265.4 billion by 2026.

In the context of iOS app development, it will become profitable for businesses to develop iOS apps related to healthcare. Moreover, it will use the upward trend of wearables for fitness to the maximum. Wearable iOS apps are convenient to use and thus this technology will continue its growth in this realm.

To make sure that the iOS mobile application works well in the market, it becomes necessary to choose a suitable programming language. Swift, over the years, has become a minimalistic iOS app development tool. Leading business organizations such as Slack, Linkedin, etc., use it to enhance their business benefits.

ReactJS Developers: why should you go for them?