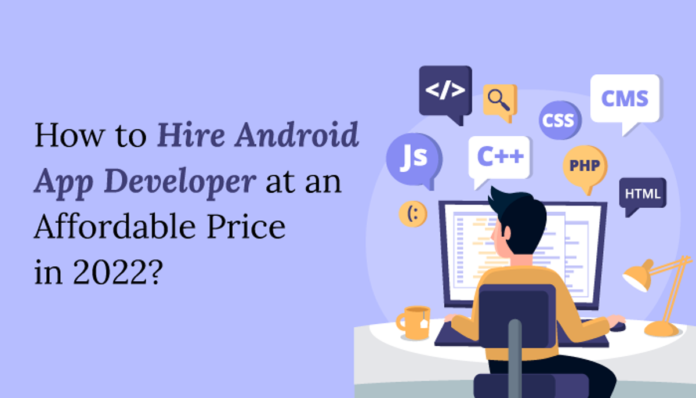 Android app development is more popular today than ever. While iOS is a tough competitor, there are areas where android clearly takes the lead. As the stats tell us, there is as many as 2,613,429 android apps in Google play.

In addition, 96.3 % of the android mobile apps are free, a big reason behind the expanding customer base. Now, if you are one of many people or businesses who are inspired by this and want to develop your own android app, there is a problem you might find. This is hiring the right android app developers. For that, you have come to the right place.

Freelancers are the most popular ones when it comes to hiring android app developers. Thanks to technology you can hire freelance developers from another side of the world. There are various popular platforms like LinkedIn, freelancer, Fiverr, and so on.

So, should you consider freelancers as your developers of choice? Well, certainly. However, you should be careful as freelancers come with some shortcomings. For instance, they aren’t bound by any contract, they can leave whenever they want, and so on.

As such, this option is highly recommended when you want to hire an android app developer. With this said, let’s move to the last and least popular option.

Lastly, the in-house team. Now, there are many reasons why this option is the least recommended. You see, first of all, this is quite expensive. Firstly, you will have to hire a recruiter you will then in turn hire a team of developers and other required members.

Moreover, you have to provide them with all the employee benefits as well as a salary. So, if you don’t have enough work for them, you will be paying them in the loss.

So, these are the options when it comes to hiring an android app development company. Now, before you decide to hire a developer, let’s see what are the things that you should consider while hiring these developers in the next section;

Things to Consider When You Hire Android App Developers

Just like everything else, there are several things that you have to consider while hiring Android App Development Services. And in this section of the blog, we shall be looking at these things. With this being said, let’s get right into it:

Now, if you are hiring android app developers, you want to hire the ones that have expertise in your particular niche. This will not only add to the total result quality but also give you other many benefits.

The team size might not seem an important factor but this is something that you have to consider while hiring android app developers. As we already know, no team of developers, freelancers, or development Companies works on only one project at a time.

Now, if the team size is on the smaller side, they will be struggling with the work and cutting corners.  On the flip side of the coin, a larger team will have no problem handling multiple projects at once.

Past work is something that will work as a valuable insight into the ability of the android development company. In addition, it is also recommended that you consult the prior clients as they can give you important information about real-life performance, communication, aftermarket services, and so on.

So, this is something that you need to consider while hiring an android app developer.

Communication is the key to any relationship and this also stands true when you talk about yourself and the developer. So, it is recommended that you pay close attention to the initial communication that happens between both parties as it will let you know how they will communicate with you later on.

Lastly, code ownership. You are paying the developers for the work and the code is owned by none other than you. Therefore, it is suggested that you make this clear with the android app development team during the initial stage.

And if the developer seems to avoid this talk or doesn’t want to about the same, talk the sign as a red flag and consider other development company.

These were the things that you need to consider while hiring the development team for the android mobile app. With this done, we will be looking at the average cost of android app development in the next section.

The Mobile App Development Cost depends on various different factors. These factors are, as mentioned below:

These are the factors that affect the total cost of android mobile app development. As such, the average cost of development you can expect is anywhere between $40,000 and $60,000.

Jermaine Trotman is the CEO of Nimble AppGenie, a company renowned for being dedicated to working with clients in a collaborative manner, in order to develop Digital Wallets, FinTech applications, and Education software that are hugely successful in their respective markets.

How to Hire Flutter Development Team for your Business Needs

What is Snapchat Unfriend App?

Why Should Startups Choose Flutter for Mobile App Development

Understand how to create a Personal Developer Instance in ServiceNow

5 Tips to Overhaul Your Website for a Better Customer Experience