HomeFinancialLuna's Crash: A Look Into The Future For Cryptocurrency
Financial

Luna’s Crash: A Look Into The Future For Cryptocurrency 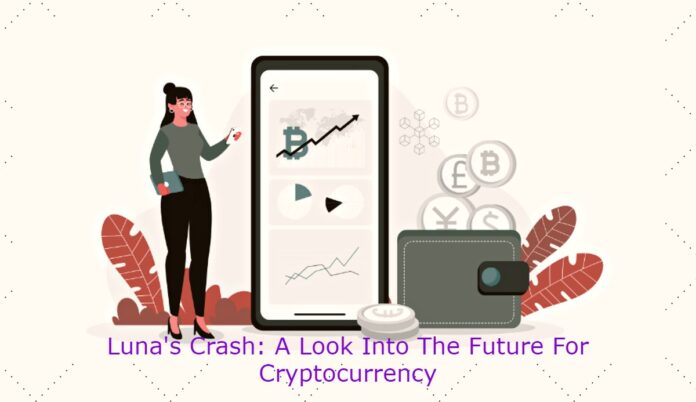 You could have been quietly sure that investing $130 in the cryptocurrency Luna in April 2022 was a wise decision, just as you are that playing at the best online casino is a good experience. However, Luna’s value has subsequently plummeted. Fast-forward a month, and that $130 is now worth pretty much nothing. Which is always one of the risks versus rewards that you encounter investing in crypto.

Luna was not the only victim of a week in which cryptocurrency prices plunged by more than 30%. Although some have recovered from the initial amount, the market lost nearly US$500 million in a matter of days. This raises existential concerns about market sustainability.

The financial “attack” on Terra (UST), a stable coin that is meant to reflect the US dollar, was trading at 18 cents. Luna, the companion currency to Terra (UST), has also crashed.

This type of attack is extremely sophisticated and includes several transactions on the crypto market to trigger certain effects. These might lead to huge profits for the “attacker”. The trades caused Terra to plummet which then led to Luna’s collapse. This caused fear and panic, prompting market withdrawals, which is completely understandable

Stablecoins are heavily dependent on trust and perception. When these things go wrong, large drops can often occur quickly. The stability of stablecoins has been questioned by the recent sharp drops in cryptocurrency prices. They are supposed to be stable because they can keep a “peg” to another asset.

The consequences of this week’s events were seen across the crypto ecosystem. Single-day losses are comparable to, or worse than, a “Black Wednesday,” for cryptocurrency. (Black Wednesday was the day when speculators caused a collapse in the value of the pound in 1992). Tether, the most well-known stablecoin, has fallen to 95 cents on the dollar.

The future of cryptocurrency will depend on how investors react. Panic and despair are already setting in. Some people have compared this crisis to a bank run. Customers worry more about the bank’s inability to pay their money during a bank run than about losing their money.

Investor behavior is consistent regardless of past price volatility: the assumption that the asset’s price will continue rising. This is a good thing for the investor. Investors see the asset increasing in value over time and decide to invest.

Investors may decide to increase their investments after seeing early results. Add social media to the mix and you’ll have the recipe for continued investment.

An Ideological Loss As Well As A Financial One

Anyone will have invested in cryptocurrency in hopes of making a fortune. This belief has been discredited. One reason to invest in cryptocurrency is the belief in their potentially transformative power or that they will eventually replace financial exchanges, which is a common belief.

This ideological outlook makes it less likely that investors will sell their shares in the event of a sharp decline. This group may be a source of optimism for the industry.

A Voyage To Discover “Fundamental Value”

In the aftermath of stock market crashes, we speak of “fundamental value” recovery. The basic value of cryptocurrency is often considered zero. It is possible, however, that cryptography has some intrinsic value. This is based on belief. Because of their belief in the long-term potential of bitcoin and the possibility of making money, the intrinsic value of cryptocurrency could be determined by how large the investor pool is.

We can explain more of the behavior we observe if we consider bitcoin investors to be different groups with different incentives. Investors can take comfort in the fact the worst of the downturn may be over and that there are better times ahead. However, there is no guarantee in crypto or any other market for that matter, and that’s what any financial expert will tell investors.

Industries of the Future To Invest In Today

Top 10 Wealth Creation Books to Have on Your Wishlist