HomeBlockchain6 Things To Do When Starting a Blockchain Business
BlockchainGeneral

6 Things To Do When Starting a Blockchain Business 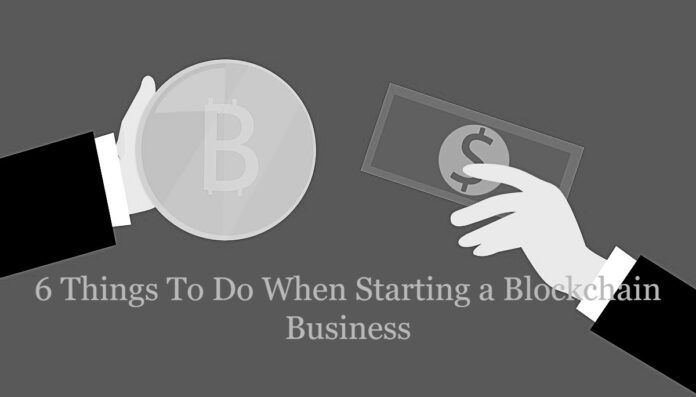 Whether you’re a crypto enthusiast or a casual digital currency observer, chances are you’ve heard the term blockchain. If you’re the former, you likely understand how the technology works. Should you fall under the latter category, the concept’s probably still a little hazy for you to grasp. For the sake of clarity, let’s discuss what blockchain is.

Blockchain is a peer-to-peer distributed ledger secured by cryptography. Its emergence coincided with the introduction of Bitcoin in 2009. Bitcoin is credited as the pioneering blockchain technology, which paved the way for the rise of other blockchain platforms.

Blockchain is a series of data batches referred to as blocks. These blocks form an unbroken chain by way of a hashing function. Since the blockchain has no single owner, all stakeholders assume the responsibility of upholding its integrity. It is a revolutionary technology that boasts a myriad of benefits for businesses.

Blockchain has amassed considerable popularity due to several reasons. Here are some of them.

With enough imagination, you could find a practical use for blockchain in whatever type of business you do. However, it is most suited to certain industries, such as the following.

This list is by no means exhaustive. In fact, it barely scratches the surface of blockchain business possibilities. Consider blockchain a versatile technology. You could fashion it into a system that can specifically cater to your unique startup.

6 Things to Do When Starting a Blockchain Business

Before pursuing a blockchain startup, first, make sure you got the following covered.

In recent years, pursuing a business has become easy. If you want to become your own boss, now is the best time to follow through with that inclination. Opportunities are everywhere. Technologies abound. Consider blockchain. Come up with a viable business idea and align it with technology you understand, and before you know it, you’ve hit the jackpot.

Contrary to popular belief, the benefits of blockchain technology are not exclusive to crypto enthusiasts who mine or invest in digital currencies. Blockchain has viable business potentials outside those categories. The key is to get creative and find ways to maximize the technology in service of whatever kind of startup you’ve built from scratch.

Facebook
Twitter
Pinterest
WhatsApp
Previous article
How Do Smart Thermostats Work, and Should I Get One?
Next article
Launch Your Own NFT Platform With This Blueprint: Dissolve Yourself In The Sphere Of NFTs

Future of Blockchain Technology in the Education Sector

Food Safety Training: Important Points To Note Before You Sign Up

How can blockchain innovate the e-commerce industry in 2023?